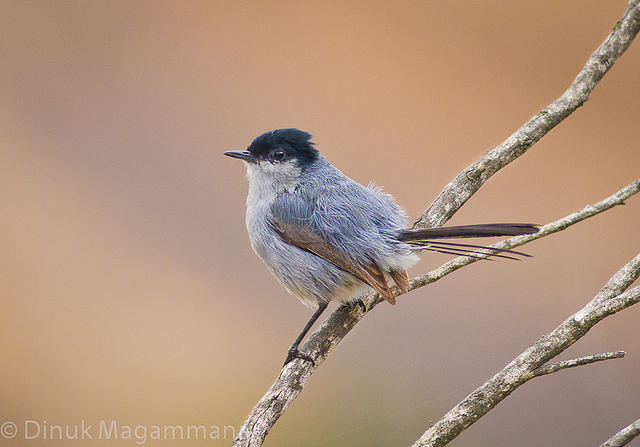 I like to hike the Ocean Trails Reserve near the golf course in Rancho Palos Verdes, especially in the spring. I admire the bright yellow smiles of California bush sunflowers, watch for gray whales blowing as they swim north to their Alaska home, and hope to spy an elusive California gnatcatcher.For years I never saw one, and then one day I was walking along the path and heard to my right that littlekitten-mewing song they sing. Then I heard it again to my left! Lo and behold, there was one sitting on a coyote bush to my right, and another on an artemesia bush to my left! They were so close I’m not sure if they were upset with me or with each other for interloping on their personal territories. I will never forget that moment.
I’m fascinated with this little gray songbird: its pert black tail with white edging, its song like the “mew” of a kitten. It weighs no more than a nickel but has had a major impact on the landscape of Southern California. How can such a tiny bird do that?

Back in the 1980’s a scientist named Jon Atwood chose the little gnatcatchers in Palos Verdes as his PhD research project. The birds weren’t called California gnatcatchers then. They were thought to be a local population of the Blue Gray gnatcatcher.  As he studied the birds, though, he realized they were distinct from the blue gray gnatcatcher and, because of his research, in 1989 the Ornithological Union declared the California gnatcatcher a separate species. The U.S. population is very small and only found from Los Angeles County south to San Diego. The plight of the California gnatcatcher became a rallying cry for people who loved birds and nature. The birds’ special habitat, the coastal sage scrub, was disappearing. Everyone clamored to use the gnatcatcher’s land for their own purposes: homes, roads, parks, businesses, golf courses, as well as natural areas. How could all the people and the birds be satisfied?

After years of discussions and proposals, local citizens, environmental groups, businesses and government organizations came up with a plan to preserve land for the gnatcatchers and other species whose existence was threatened by too much development. The compromise allowed everyone to get some of what they wanted. The plan isn’t perfect, but it looks like the birds are here to stay.

So, the next time you are hiking the bluff, listen for that soft mewing in the coastal sage scrub, or try to catch a glimpse of a tiny gray bird flitting about the artemesia catching spiders and insects and remember that sometimes mighty things do come in small packages.

Susan Deo (author) is a Sierra Club member who has taught life science, marine biology, and environmental education from pre-school to the college level. A docent with Los Serenos de Point Vicente, she has published short stories and essays and is working on several picture books and middle grade novels.

“Along the Path: A Young Person’s Guide to Exploring Nature” is a recurring column, by various authors, for the eternally curious.