Posted on May 2, 2018 by Palos Verdes-South Bay Sierra Club 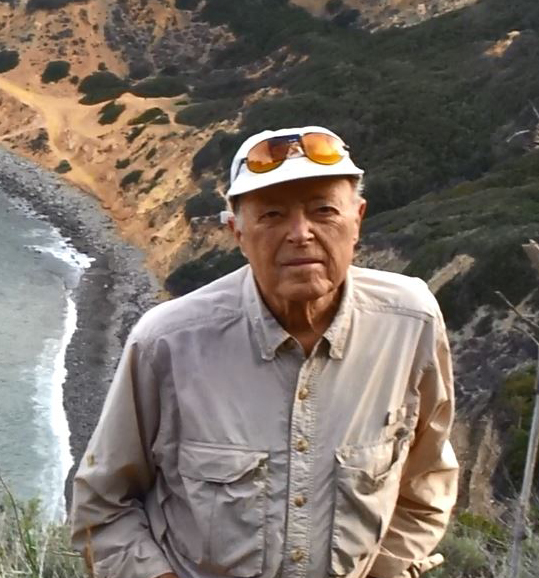 Bob Beach, 94, a stalwart of the Sierra Club PV-SB group since the 1960s, died April 2, 2018. Bob touched many lives during his remarkable career ranging from World War II to the US entry in the space age and finally the Sierra Club. Here are remembrances by three of his many friends and more photos.

I met Bob in the early ‘80s, when he joined our PVSB conditioning hikes in the fast group. In his 70s, he was as fit and fast as any of us. He became an M rated Outings Leader, and a highly respected leader in the Wilderness Travel Course program, into his late 80s. The peak we all did on our rock scrambling training was named Mt. Bob! He was also a frequent, competent, cheerful contributor to the trails building and maintenance work.

The High Sierra backpacking trips the longtime Scoutmaster took Scouts on were legendary. Bob and I led a popular annual hike to Strawberry Peak; everyone was encouraged to bring a dish using strawberries.Two more memorable hikes: Late spring in the early 90s “Cactus to Clouds” ascent, an 8500′ climb up the north side of San Jacinto with Maria Giles and Jim Brown, utilizing ice ax and crampons to negotiate the steep hard packed snow couloirs to the PS Tram. A dawn-to-midnight extravaganza to climb Sheep and Martinez peaks, followed by a lot of cross-country hiking in the dark. For Bob, in his late 80s, it was quite a feat!

Recently, Bob joined our weekly a.m. neighborhood hikes: mostly camaraderie, with whatever hiking we (usually I) could put up with. They usually ended with my wholegrain pancakes, which Bob loved.

I feel fortunate to have had Bob in my life, and have always regarded him as an exemplar of what’s possible in a human being and friend. I never heard him speak ill of anyone, or complain, even in the most challenging of conditions. He was always there to contribute solutions when necessary. I called him my Six Sigma man. They are rare indeed.
— Barry Holchin

I had the pleasure of Bob’s company and expertise on many occasions: conditioning hikes, the LTC navigation noodles, peak-bagging trips, Yosemite Volunteer in Parks projects, PVSB ExCom meetings, ski trips, car camps…. the list goes on. Bob was always ready and eager to co-lead with me. I will always remember standing on top of White Mountain with Bob on a Natural Science Section car camp to the White Mountains and Bristle Cone Pine Forest. A lady in her 60s was bragging about having made it to the top in her advanced age – until someone pointed out that Bob was in his 80s.

Bob exemplified volunteering to help others and serve his country. A World War II veteran, he served during the European campaign as a member of a tank crew. He received a Purple Heart when he was hit by a sniper’s bullet that ricocheted off the tank turret. When asked Bob would remark, “It was only a ricochet!” He led backcountry trips with Boy Scouts, and helped seniors with tax documents. A longtime Outings Chair for PVSB, he received the Chester Versteg Award for his countless contributions.

Bob Beach, well known and respected in Sierra Club circles, was also a laboratory manager at the Space Technology Laboratory, STL, (later TRW). His organization contributed significantly to the success of the Apollo program, which landed 13 astronauts on the moon.

I hired into Bob’s laboratory in 1965 and was privileged to help develop the software that computed the Apollo trajectories from lift-off to landing on the moon. Working with Bob was a pleasure. A low-key straight shooter, he inspired staff confidence and assured success.

Eventually our career paths diverged and I lost contact with Bob. Many years later, I joined the Sierra Club Thursday night conditioning hikes, and, lo and behold, there was Bob, as affable and pleasant as ever. At his 90’s birthday party I kidded him telling him that since I attended his 90’s, he is now obligated to attend mine. He missed the mark by a few years, but I am sure it was not for lack of trying.

← Along the Path: The Garibaldi’s Garden
Environmental Impacts of the Proposed Desalination Plant →