Along the Path: A Young Person’s Guide to Exploring Nature 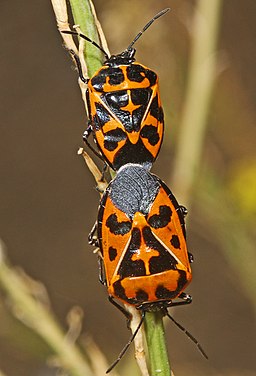 The Bladderpod and Its House Guest

The first time I saw a bladderpod (Peritoma arborea) and its house guest, the harlequin bug (Murgantia histrionica) I was intrigued. Honestly? You almost always find harlequin bugs on these plants? And the plant is a native and the bug is not?

The harlequin bug is an invasive species, especially attacking garden plants in the mustard family, like broccoli, cabbage and kale. (It’s sometimes called the cabbage bug.) How did these pests end up being attracted to bladderpods, which aren’t even in the same plant family? And why aren’t harlequin bugs destructive on bladderpods? Scientists don’t have answers to these questions yet. 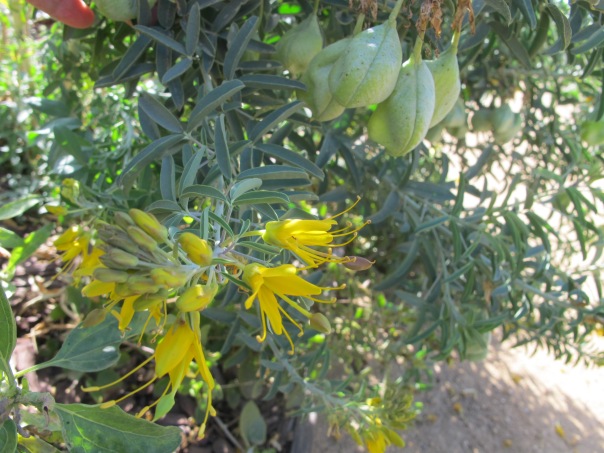 Bladderpod is a small shrub native to Southern and Baja California. It blooms November to June, longer than many local species. Its pretty, bright yellow flowers attract hummingbirds, butterflies and a variety of bees. Many bird species find cover in the shrub’s shade as well. It has a deep tap root, and some say mature plants are so drought-tolerant they actually “resent watering.” The plant has a very distinctive odor. Try cupping your hands around a leafy stem and taking a whiff. Ask a friend to do the same and compare your impressions. Why do plants have odors, some pleasant, some not? One reason is to attract pollinators, like bees. Another is to repel animals that might eat them—or to attract predators that will eat the insects that are eating them! Maybe it’s the smell of the bladderpod that first attracted the harlequin bug. We don’t know for sure. The seed pods, after which the plant is named, resemble small oval inflated balloons or “bladders.” The small round seeds inside look a lot like peas. Native Americans often ate bladderpod seeds and flowers. At first, the papery pods are green in color. They even photosynthesize, a great adaptation for the nutrient- poor soil where the bladderpods grow. As the seed pods mature, they stop photosynthesizing and turn yellow, then brown.

The harlequin bug is black with colorful orange, red, yellow or white markings. Originally from Mexico and Central America, they are true bugs (Order Hemiptera). Bugs have piercing, sucking mouthparts. They poke their proboscis or beak, a long tube, into a plant and pump saliva through to partially digest their food. They can cause wilting, stunted growth or even death to target plants, but not to bladderpods. In fact, if the host bladderpod is healthy, a harlequin may spend its entire life on one plant. The harlequin bug has wings and can fly but if disturbed is more likely to drop to the ground. The female lays her white barrel-shaped eggs with black stripes in clutches of twelve. After they hatch, the young molt through several stages with different markings. Feeding on its host plants helps the Harlequin bug in another way too. The bugs extract chemicals from the plant that make THEM taste bad to their predators! The bug’s bright coloration helps identify them as NASTY tasting.