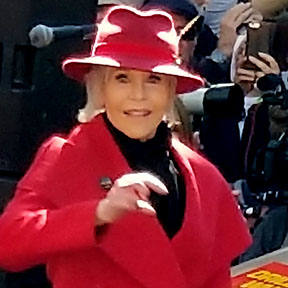 Jane Fonda responded to teen climate activist Greta Thunberg’s alarm: “We have to act life our house is on fire–because it is!” For 14 weeks she and other activists – celebrities and unknowns – protested the lack of action on the climate crisis every Friday in front of the U.S. Capitol.

February 7 was a beautiful day for going to downtown Los Angeles, so Judy Herman, Joyce White and I carpooled down to participate in Fonda’s first Fire Drill Friday in California. Previous demonstrations in Washington D.C., resulted in arrests of Jane and some of her high-profile supporters. We were hoping for a less dramatic result for the three of us but wanted to support the effort.

Arriving early at city hall, we found a crowd gathering, many with signs, and a multitude of television cameras. South Bay residents thanked us for bringing a “Ban Toxic MHF” sign. Our initial spot was directly in front of the stage, but as several hundred people crowded the plaza we found ourselves straining to see, so we moved to a less crowded grassy area slightly above the stage where we could still hear and see the speakers.

Before the rally got underway, I spotted Jane in her fire engine red coat and hat talking to Norman Lear and Ed Begley, Jr. Taking the stage, Fonda called on Gov. Newsom and local political leaders to halt the approval of new oil and gas drilling permits in California, and to pass bills like AB 345, which would create mandatory setbacks of 2,500 feet to separate oil and gas facilities from places where children gather. Echoing the cry for climate action were celebrities like Joaquin Phoenix and local activists like Wilmington resident Alicia Rivera of Communities for a Better Environment.

Around 1:30 p.m. the event was still in full swing, but as we had prior commitments we had to leave. It was a good event to raise awareness, and the good news is 1) We weren’t arrested! and 2) Since we carpooled we could FasTrak past traffic in my all-electric car coming and going. Environmental win all the way!

The next Fire Drill Friday rally will take place March 6, 11a.m. at San Pedro City Hall, 638 S. Beacon St. Sign up to take action then and at future events at https://firedrillfridays.com/

← Along the Path: A Wonderful Bird is the Pelican
The Gnatcatcher Saves Coastal Habitat →

Center of Life: A Virtual Gallery Tour of the Secrets at the Centers of FlowersMarch 21, 2021
13 days to go.

Learn more about this photo presentation.