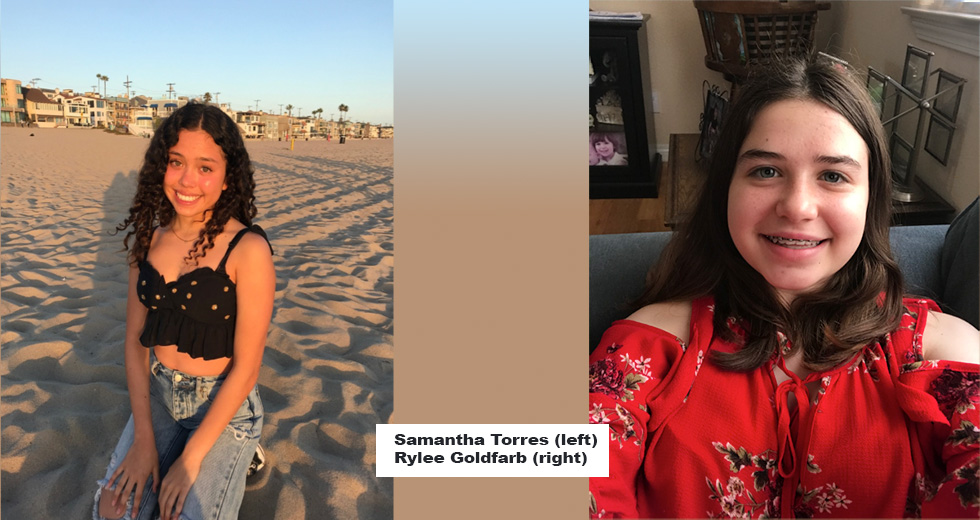 South Bay high school students, Samantha Torres, 16, a junior at Mira Costa High School, and Rylee Goldfarb, 15, a sophomore at Redondo Union High School, have something unusual in common – they’ve both been environmentalists since they were kids.

In the third grade, Samantha Torres was excited to participate in Grades of Green when her parents discovered the organization.

Grades of Green (GOG), a non-profit organization founded in 2010 and based in Southern California, sprang from the concerns of four women for the future of the environment and the impact it would have on their children and future generations. To date, GOG has inspired students in 47 states and 27 countries to become involved in environmental sustainability through programs at each school-age level.

The Youth Corps, a past program at GOG with participants from grades K-12, offered one-on-one mentorship where students worked on an eco-project each year through their schools. Projects varied in size, from a small group of students up to forty. Typically, each student would have the same mentor throughout the span of the program to help develop their leadership skills. In the third grade, Samantha spoke on a panel at the Pasadena Convention Center answering general questions about GOG; she had her own column in their newsletter. For her GOG project in the fourth grade, she advocated for more recycling and composting at Meadows Elementary School.

Samantha on a panel at the Pasadena Convention Center, answering questions about the Grades of Green Organization.

In her freshman year of high school, she executed her first semester-long, student-led campaign.

“At first it started off with me just getting a little group together of 10 of my friends,” she says, “[W]e didn’t have it as a club at [Mira] Costa [High School] yet; it was just us getting together outside of school and working on these projects at our houses on the weekends and stuff like that. That year we put on three beach clean-ups in Hermosa Beach at the pier, which was a super fun thing to do, and they ended up being really successful.”

Samantha with her Grades of Green team

The following year, Samantha and her friends started their second campaign, but she says, “Our project got cancelled because of Covid-19; we were going to have a stand-up paddleboard cleanup in King Harbor and Redondo Beach because that was supposed to happen last March for our Waste Campaign. Dive N’ Surf was going to donate a bunch of boards and kayaks to us to have that event, but it ended up just getting pushed back so that might be something we do in the future.”

That same year Samantha initiated a “Meatless Monday” campaign, which eventually became her Climate Solutions Campaign project the following year when she officially established the Grades of Green Club at her school.

The Climate Solutions Campaign is one of GOG’s school-year long programs with students from eight states and eight countries participating this year. A sort of competition, the entrants are judged by a panel of environmental experts, including scientists and educators, and winners are awarded a grant for their team, with the goal of environmental impact. Students work under the guidance of their GOG mentors to plan and execute their projects.

With respect to her school’s GOG club, Samantha says, “It started with us 10 original people and now we have 40 members, but more like about 25 super-active members, so it’s grown a lot and we’re working on that campaign. We started it through our Instagram account, @forthethegreenergood1 which launched last month.” Because she’s a vegan, the campaign is clearly also very personal to her.

Outside of school, Samantha joined the Manhattan Beach Sustainability Youth Council, where once a month, students would meet at the Manhattan Beach City Hall for educational sessions on current environmental issues, with a calendar of events such as the Hometown Fair in October. Although it has not been active since the onset of the pandemic, the members have been working virtually to plan future projects. The Youth Council aims to empower their members to raise their concerns with local citizens on the same issues.

When asked how she thinks she can inspire younger generations and her peers to be just as involved in the environmental movement, Samantha said, “Seeing your peers taking action will inspire them, because people don’t like to be the only ones speaking out or posting things online.” She continues to succeed in creating a sense of community both in and outside of school.

Samantha says she’s most proud of the opportunities that she’s had to speak and use her voice. “That’s the thing I’m most grateful for; having a platform and being able to share my opinions and my passion for the environment.”

Case in point, this past November, Samantha had the opportunity to voice her concerns on a public forum during a virtual city council meeting. After waiting for hours to speak during the public comment section, she advocated in favor of increasing Manhattan Beach’s renewable energy usage. The measure passed and will go into effect toward the end of this year, with the city of Manhattan Beach increasing its renewable energy usage from under 50% to 100%.

Samantha already knows that whatever she pursues in the future will be environmentally related. “I want to do something where I’m making a positive impact on the environment, whether that’s being an environmental lawyer or working for a non-profit organization. I’m really outspoken so I’d love a job where I can use my voice, whatever that job that might be.

I’ve also thought about how it’d be really cool to own some type of sustainable swimwear brand because I’m just obsessed with the beach and I’m addicted to swimwear; personally, when I’m shopping, I noticed there aren’t that many sustainable options.”

So how did our other GOG superstar become involved with environmental activism?

It didn’t start the same way, but will no doubt continue on a very similar journey.

“I’ve been with GOG for nine-plus years and ever since I was little, I’ve always seen the world differently,” Rylee says. “Like I noticed that when I would walk on the streets, I would see plastic and trash everywhere and a lot of litter; I’m from the South Bay and I’m at the beach all the time and I’d see that, and it would always bother me.”

“Before I did Grades of Green, I would do trash-sorting at my school or I would tell my friends fun facts about the environment or things they didn’t know. I was trying to do things on my own and then GOG did a presentation at my school.”

While visiting Madison Elementary School to give a presentation, Allie Bussjaeger, the former co-executive director of GOG, was impressed when she noticed six-year-old Rylee helping to sort trash into recyclables and compostable items. She gave her her business card, which Rylee, in turn, presented to her mother when she got home. The next year, Rylee officially became part of the GOG Youth Corps.  In addition to leading a Green Festival that same year where she recruited others to host booths to educate students about environmental issues, her first green project was “Make a Difference Mondays,” in which her peers were encouraged to do one thing that reduced their carbon footprint once a week, such as turning the lights off after leaving a room.

Her most impressive Green Festival turnout so far, however, was the “It’s Easy Being Green” festival she hosted at Adams Middle School in 2018, funded by the Disney Be Inspired grant she had applied for. Among the 400 attendees were local representatives and school board members, various non-profit organizations, other local GOG students, advisors and mentors, and city council and assemblypersons who came to recognize her work.

In 2019, Rylee also participated in a Plastic Pollution Summit hosted by Algalita, a non-profit organization based in Long Beach. Over a weekend at Long Beach College, she attended seminars about the history of plastics and plastic pollution, led by speakers who helped her further educate herself about ongoing environmental issues and how she could make a difference.

This year, her Climate Solutions Campaign, unsurprisingly, is tied to her mission to reduce plastic waste. She says, “I’m hoping to educate and motivate people to reduce their use of single-use plastic, and to switch the responsibility of plastic waste to the producers of plastics rather than the consumers.” In the next two months, she plans to host a virtual screening of ‘The Story of Plastic.’ “I want to start a social media campaign around the slogan ‘We Can’t Recycle Out of the Problem, Reduce Your Use,’ and I was hoping to encourage people to sign petitions, to support state and federal bills, reach out to politicians to support environmental bills, and do anything they can to work towards a change in the environment.”

She’s serious about reducing her own plastic waste, too. “Anytime we go to a restaurant I would take the plastic spoons they had and reuse them; I have a whole big collection of those. I know they’re supposed to be single-use, but of course I don’t like that.” She even recycles plastic materials for her personal art projects. “I used to make artwork where I would take caps and cut plastic water bottles that I collected from school,” she adds. “I had these really cool displays all with plastic water bottles, some that I collected from school, and we have one outside our house; it’s almost like a wind-chime but it’s so beautiful, we painted different bottles, cut them up, and put them on this wooden ball, and it always flows in the wind and it’s really pretty.”

“How do you think we can inspire the younger generation to become more involved with the environmental movement?” I asked.

“The main thing is just educating people and even if they aren’t able to join non-profit organizations, which I highly recommend, it’s just educating them and telling them what they should be doing. What I feel like people don’t understand is that this is our planet: there’s only one Earth and it is being destroyed right now by our own doing.” Her motto is, “No matter what size or age you are, you can change the world.”

Rylee also takes initiative to research environmental issues she is unfamiliar with. “I’m learning so much about state bills and assembly bills which I never knew about; I didn’t know there was a whole political side to this before which is very interesting. It can get frustrating when things don’t get passed but I’m learning, and I think that’s very important.”

Career-wise, Rylee is considering something in the environmental field like environmental science, more specifically marine biology. She also isn’t opposed to continuing to work for Grades of Green or similar non-profit organizations after she outgrows the program.

Believe it or not, these two Greta Thunbergs of the South Bay have not officially met in person; Rylee is sure that they must’ve seen each other during past GOG gatherings, but after participating in a joint speaker series webinar with South Bay Cares in January, they’ve already exchanged phone numbers and are looking forward to collaborating on a future project.

Thanks to James Saracini for providing invaluable information on Grades of Green.